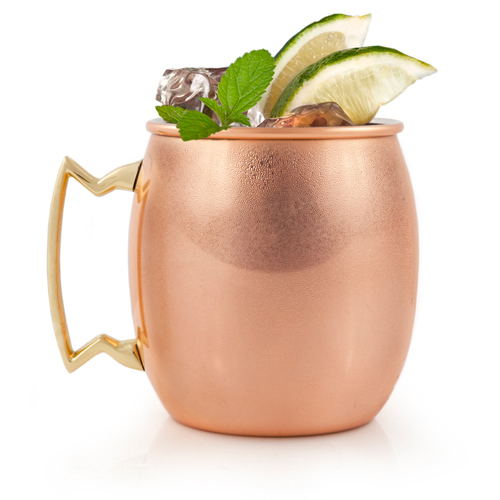 History of the Moscow Mule and its copper mug:

The copper mug is an iconic and distinctive staple to any Moscow Mule cocktail. But tradition alone doesn’t make serving a Moscow Mule in any other drinking vessel blasphemous. In fact, there are many benefits to making sure a Moscow Mule is served in copper, just as its creators intended. Aside from the mug’s distinctive look, many claim the copper enhances the cocktail’s distinctive flavor by slightly oxidizing when filled with alcohol. Additionally, because copper is such a good conductor the mug effortlessly takes on the drink’s icy temperature. This cold crispness makes every sip a cool and refreshing sensation.

The Moscow Mules itself – a spicy and zesty combination of ginger beer, lime juice, and vodka – first came onto the drinking scene in the 1940s. There are a few rumors circulating about how the famous drink was invented, and how the copper mug came to be its chalice, but most stories put these two events as happening simultaneously.

Sources seem to agree that a man called John Martin purchased a small distillery called Smirnoff (the same one we all know and love). Although these days the brand is world famous back then it was struggling to take off. Most Americans hadn’t even heard of vodka, and those that had thought of it as a Russian drink.

According to the website copperdrinkingmugs.com, the copper mug’s conception came about when Martin visited his friend and the owner of the Cock ‘n Bull restaurant in Hollywood, Jack Morgan. During this meeting Martin lamented the poor sales of his vodka, and Morgan complained that he couldn’t sell his ginger beer. Together they apparently joined forces, combining the two products with lime juice to produce the popular drink we know today. As luck would have it, another of Morgan’s friends was reportedly facing similar difficulties moving stock – they had a copper factory with a surplus of…copper mugs. In a twist of fate the three failing products came together to create an icon of the cocktail world.

After the three merged, Morgan is reported to have gotten stars like Woody Allen on board as part of a tactic to advertise the drink. Copperdrinkingmugs.com says the names of celebrities were engraved on the mugs to further promote the cocktail. But, perhaps more iconically, the mugs were stamped with the image of the cocktails namesake – a kicking mule.

Paykocimports reports that once the cocktail was created Martin wanted more recognition for his product, so he chose copper mugs to make his brand visually different. It says he apparently traveled around the country and asked bartenders to pose with a branded copper mug for two photographs – one for him to keep and one to be left with the bartender. The photo left at the bar served as advertising for the Moscow Mule, the Smirnoff brand, and its new iconic mug. The photo Martin took with him was used as proof in the next bar that the popularity of all three was growing!

These days the Moscow Mule has experienced somewhat of a re-birth in America, with a recent spike popularity in the past half-decade or so, particularly in the Midwest. Since its conception in the 40s, the Moscow Mule has made its way into barlore to become a bartending staple – still, of course, served in it’s traditional mug. New twists on the drink have also found their way onto cocktail menus, such as the gin-based London Mule and the bourbon-based Kentucky Mule.

As the Mule became a permanent feature on drink lists its mug became a must-have in bars. But establishments aren’t the only ones who want the mugs. It seems customers do too, with 400 copper mugs stolen from The Marriot in just one night at an event in 2014 according to Washington DC Eater. At $30 a mug, copper-thieving customers could be an expensive trend! And the copper fascination doesn’t stop there – copper straws have also started popping up in bars and for sale in stores and online.

Yet, regardless of modern twists and copper add-ons, the classic vodka Moscow Mule and its mug have survived seven decades together as the perfect team, and that’s something to drink to!

Coming soon: Different types of copper mugs, and how to clean and care for yours at home.